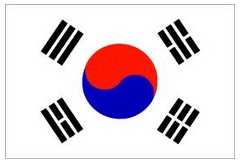 As a Taekwondo student, you’ll be seeing a lot of the Korean flag, the flag of the Republic of Korea (and currently South Korea).

The national flag was adopted in 1882, after the entire united kingdom of Korea was opened to the outside world.

This Korean flag is also called Taeguk-ki. The flag consists of three parts: the white background (also called the field), the red and blue center of the flag (with the popular "yin-yang" symbol), and the four black line designs, or trigrams, surrounding the circle in each of the four corners of the flag. With these simple designs, the flag represents the harmony, or balance, of all things in life.

The central blue and red "yin-yang" symbol is called Taeguk (thus the name Taeguk Poomsae). This symbol represents the balance of opposing forces: heaven-earth, good-evil, male-female, light-dark, life-death, fire-water, push-pull, etc. The blue is called um and represents the negative aspects of this rhythm, while red, called yang, represents the positive side of this balance. Thus the Korean term for "yin-yang" is um-yang.

The four black symbols in each corner carry the same theme of balance. Each trigram, also called gye, consists of three parallel lines, some of which are whole and some of which are broken. Each gye has a specific name and represents a different concept:

Koreans actually call Korea Hangeuk, and the population, Hangeuksaram. The ancient name of Korea is Choson which means, "land of the morning clam" and derives from the Choson (also called the Yi) dynasty (1392-1905).

The name of Korea comes from the Koryo dynasty (935-1392), when people from the west first made contact with the country.

The national anthem for Korea is "Aegukga" (translated "Love of Country"). It was written during the Japanese occupation of Korea (1905-1945).