The London Olympics are in full swing currently (at the time of this writing) and I had several requests with how to explain to spectators the rules and game of Olympic Taekwondo. This page will describe how the WTF rules apply to Olympic style Taekwondo; these rules are used in more than just the Olympics, they are used for any WTF style competition (changing the rules for various levels).

If you missed any of the Olympic Taekwondo competition, check out some of the fights on YouTube.com.

As a Taekwondo Student, you will be participating in sparring, where you will learn how to use your skills as a Taekwondo athlete in a sport or real life situation. Learn more about sparring here.

How do the players score points?

Points are scored by the players striking their opponents on the chest protector or head with kicks and punches. A kick to the chest protector that scores (using the electronic scoring system) will be worth 1 points; A turning kick where the attacking player turns at least 180 degrees will score 2 points; a head kick (and it only has to touch, not knock out the opponent) is three points. A spinning head kick (like a spinning hook kick) that touches an players head or face will be awarded 4 points. A punch that strikes the chest protector and results in "trembling force" (in other words effects the other player) will be one point.

There is no electronic scoring system for the gloves at this point, so points are added by the center referee and a panel of judges. The helmet is also not lined with sensors so a head kick is awarded by the referee and judges as well.

These rules with the points scoring encourage player to try to demonstrate what Olympic Taekwondo has become famous for: spectacular aerobatic kicking techniques.

What is a legal target area?

Kicks and punches can be anywhere on the chest protector (hogu); kicks only to the head and facial area. The spinal column is not an approved target, and below the crest (top) of the hip bone is not allowed (no leg kicks or sweeps).

There is a lot of players bouncing, why are they doing that instead of attacking?

The goal with the new WTF/Olympic rules is to have the players wanting to be aggressive enough to attack the other player with fancy, high flying, acrobatic kicks. However, it is somewhat of a chess match. The players are positioning themselves and watching the other players reaction while "bouncing". Strategy is involved; watching for clues or hints as to what the other player will do is one of the ways to score effectively. If a player sees the back foot of his opponent moving, he will respond appropriately, either by moving back, to the side, or counter attacking at the same time, with the hope of scoring points.

However, with the increased focus on high kicks and spinning kicks, more action and points may be awarded.

What moves are illegal in Olympic Taekwondo?

A player may not grab his opponent, head but, throw, or punch to the face. A player must stay in the boundaries of the playing surface (the mat). Players must attack; they cannot stand there and do nothing. Running away from an attack is not allowed, both for the competition or the safety of the player.

A defender cannot use his leg to block an attack.

Each illegal action will add either a 1/2 point or full point to other player.

Do they have instant replay as the National Football League?

If a competitor or coach would like to challenge a decision made by a referee or for points missed during a match, they can request an instant replay. The referee and judges meet and determine if a call should be reversed. There is a time limit and number of challenges that can be issued by one player or coach to avoid coaches trying to get every kick with a second look.

Can a player be knocked out?

Yes, in Olympic Taekwondo competition a player can be knocked out by kick to the body or head. A player can lose their willingness to fight and also "throw in the towel". However, the rules of full contact only to the head to score points have changed with the goal of "touching" the headgear with a kick rather than a "full contact" blow will limit the number of knocked out players. As in with other "full contact" sports the possibility for injury is possible.

How does a player win?

At the end of the regulation time (usually three rounds) the player with the most points wins. In the event of a tie, "sudden death" overtime takes place where the first player to score a point, regardless of the value, wins.

Should one opponent be knocked out, not have a willingness to continue the fight, or an injury where they can no longer continue the other player will win the match. 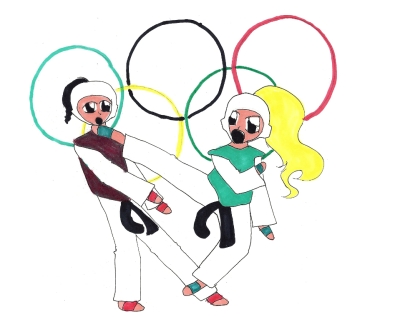