Taekwondo, one of the most popular martial arts and sports in the world, is a Korean martial art which emphasizes kicking. However, that’s the textbook definition. Taekwondo is a lot more.

What more is it?

The word Taekwondo is derived from these Korean words:

There are several variations of the spelling when written in English:

As the definition indicates, Taekwondo focuses on kicking rather than punching or grappling, although those (plus pressure points) are touched upon as students study self-defense. We encourage potential students and parents to read more about "What does Taekwondo Teach?"

Although Taekwondo is several centuries old, the sport (that is, the sort of sparring you may see in the Olympics) has been developed considerably since the 1950s. If you watch world-class competitors, you may be dazzled by high-flying, powerful kicks and acrobatics as the athletes – wearing lightweight, highly protective armor – attempt to score points rather than knockouts. Even at lower levels, competitors, while perhaps not as showy, test their skills against one another. Tournaments encompassing all skill levels and ages are held regularly in venues throughout the world.

Sparring is only a part of Taekwondo. The forms – movement patterns that increase in complexity – teach the student balance, self-defense strikes, blocks and kicks, while also training and disciplining the mental processes.

Taekwondo-guide.com is dedicated to the Taekwondo student. Use it as a reference guide and supplement to your Taekwondo education. This site will not focus on specific techniques, such as detailed information on kicks or forms; the best instruction in techniques cannot be taught by book or web site. But you'll find helpful supporting information about Taekwondo history, choosing a dojang, terminology, and practical issues. We're here to support students and their families.

Taekwondo-guide.com is my third degree black belt thesis, a result of my research into basic theories and information. The artwork is done by my daughter, Kathryn Lichlyter, currently a blue belt in Taekwondo.

Please help this site grow! Share with us. Tell us about your school or your training. Send us a video of your form. Be sure to follow the terms and conditions.

Want to know more? Check out the rest of our web site below or follow the navigation bar to the left.

This site was submitted and accepted as my black belt thesis.  I've added a video of my breaking techniques here.

I had to demonstrate advanced self defense techniques, breaking, sparring, kicking, and all the WTF Teaguk and Black Belt Forms up to Taebeck. 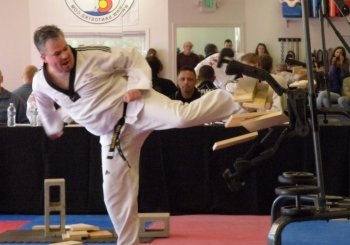 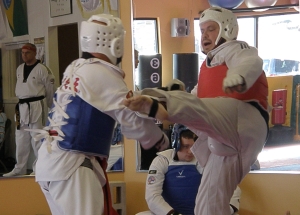 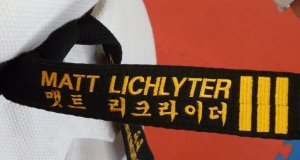 Taekwondo
Taekwondo teaches forms, sparring, and breaking.
WTF, ITF, ATA Differences
There are a number of differences in the WTF, ITF, and ATA associations.
Reasons for Taking Taekwondo
Reasons for taking Taekwondo
Choosing a Taekwondo School
If you're in the process of choosing a Taekwondo School, you’ll have a number of things to think about. You’ll have many choices to make, so our best advice to you is to ask questions!
Taekwondo Belts
The Taekwondo Belts system ranging from white to the coveted black belt
Children and the Benefits of Taekwondo
Children aged four and up can benefit from Taekwondo training
Olympic Taekwondo Spectators Guide
This is a brief spectators guide to watching Olympic Taekwondo competitions
Injuries in Taekwondo
Injuries in Taekwondo can be avoided.
Black Belt Factory
"Black Belt Factory": the main purpose of this sort of school is to get a student from point "A" (white belt) to point "B" (black belt) quickly and expeditiously and then the student suffers.
Belt Testing
Belt Testing is the next level of your Taekwondo training...
Tenets of Taekwondo
Tenets of Taekwondo trace history to back the Hwa Rang Do
Taekwondo Oath
The Taekwondo Oath and interpretation of it for the student and parent.
Dojang
The Taekwondo Dojang is the place where Taekwondo Students practice.
Taekwondo Equipment
Taekwondo Equipment should be good quality and safe for you.
Taekwondo Terminology
Knowing your Taekwondo Terminology is one key step in your Taekwondo training...
Taekwondo history
Taekwondo history is full of tradition, legend, and the history of the Korean peninsula.
Korean Flag
The Korean Flag will be featured in may Taekwondo dojangs to respect the mother country of Taekwondo.
Training in Taekwondo doesn't seem to be working... is it?
How you know if your Taekwondo training is working even if you aren’t advancing in belts?
Taekwondo Trivia that no one will tell you (up front)
Taekwondo Trivia: Things nobody told you about practicing Taekwondo but which you should know
My Taekwondo
My Taekwondo Journey: From a teen to a middle aged man...
Link To Taekwondo-Guide.com
Link your Dojang's web site to Taekwondo-guide.com
Email Us
Email Us at Taekwondo-guide.com
Taekwondo-Guide.com Sources
The Sources that Taekwondo-Guide.com utilizes.
Legal Stuff
Legal Stuff for Taekwondo-guide.com
Contribute to Taekwondo
Would you like to share your knowledge about taekwondo? Great, find out how you can submit your story or tip here.