A Taekwondo competition is a chance to test yourself against other martial artists and, perhaps, win medals for your Taekwondo skills. In the ancient history of Taekwondo, similar events were held.

I remember my first competition. I was a yellow belt, having just started sparring classes, and I was allowed to compete in a local tournament hosted by a local dojang. I practiced really hard to get ready, attending every class that I could. My dad took me to the high school where the event was held. I really didn’t know what to expect. I remember watching the forms and the breaking competition (I hadn’t registered to compete in those); my dad hung out in the stands and watched.

After lunch it was my turn. Three people were in my division (boys, ages 12-14, yellow/green belt). I drew the bye and was to be paired with the winner of the first match.

Never having fought in a tournament, I was learning as I went. I watched the other two fight it out, not knowing what to look for. The winner was a green belt who was a little bit taller than I was.

When they called our match, I was ready to go! I don’t honestly remember too much about the fight, but I scored two points in the first of two rounds, both round house kicks with my left leg. However, the green belt was obviously more experienced than I, and won the match handily.

I accepted the silver medal (not really thinking I deserved it) and I swore that I was never going to be beaten again. That didn’t exactly happen! 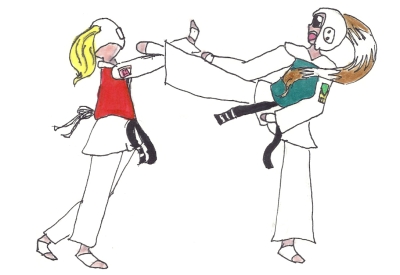 Who competes in Taekwondo competitions?

A competition brings several dojangs together to allow students to test their skills against one another. Generally, a tournament includes sparring, forms, and breaking. Occasionally, exciting categories like “creative forms,” “team forms,” or even weapons are part of the competition.

While we cannot prepare you for every single tournament, there are two things always to expect.

What kinds of tournaments are there?

Know what sort of tournament it is that you’re interested in. If you are going to a WTF, ITF or ATA sanctioned tournament, then you’ll probably know the rules going in, since tournament organizers have to abide by the sanctions of the governing body.

If you want to participate in a certain tournament, check with your instructor to make sure that it’s really something you should participate in.

What if I win?

Depending on the tournament, it could be that if you win, you will qualify to go to the next level of competition.

If you win, enjoy the victory! Put the medal on display for the world to see – maybe your living room mantel will work. Remember that it doesn't make you better than your friends, but you should certainly be happy about your accomplishment.

What if I lose?

More people lose than win in any tournament. How did you do compared to how you did last time? Did you do your best you could? Did you have fun? Most competitors are disappointed if they lose, but they know it’s not the end of the world. They chalk it up to experience. If they have learned something from it – about competing or about themselves - they consider it a personal victory.

In my career with Taekwondo I certainly lost more matches that I care to admit. But I always got back up and tried again, learning from my mistakes and disappointments. Even though I didn’t win, that didn’t make me a loser.

(Check out this page if you’re frustrated and not advancing belts or winning in a Taekwondo Competition.)

Now, we want to hear about your tournament experience.

We want to hear about your Taekwondo competition experience...

Brag on yourself, your child, your team, whatever... load pictures! We want to hear about it!