The Taegeuk Poomse (“teh-GUK POOM-seh”) are eight forms (or patterns) which each student learns at each belt level as he or she advances in the hand and kicking techniques of a WTF dojang. From the most basic form (Il Jang) to the most advanced (Pal Jang), each has various degrees of difficulty.

Many students learn these forms for the belt tests, or because they’re something new to learn. But they aren’t aware of the meaning behind each form and how it reflects the symbolism of the Korean flag, the roots of which are in oriental philosophy (you are not required to embrace oriental philosophy, however, to be a student of Taekwondo).

This symbol illustrates the balance of forces of the universe. Around this symbol are four gye, trigrams that illustrate aspects of this balance, according to the philosophy. There are actually eight trigrams for Taekwondo forms, although only four are reflected in the flag. 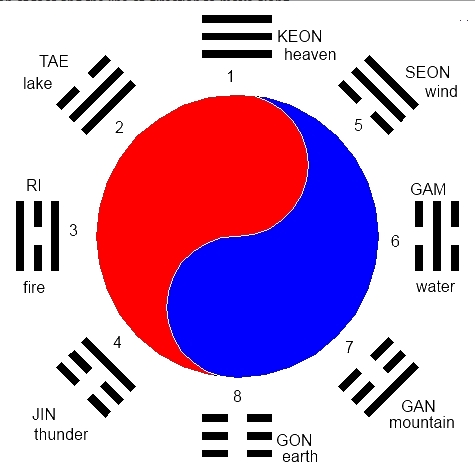 Teageuk Il (1st) Jang: Represents heaven, which is called keon. The form stands for creation of earth, while the trigram symbol also stands for continuity. (You’re not seeing a Roman numeral two – II – in the name of this form; it is the Korean word IL.)

Taeguek Sam (3rd) Jang: Represents fire and the sun. It separates mankind from animals, since man can use fire as a heat source and tool. Therefore, students should practice this poomse with fire and passion. The gye is called ri.

Teaguek Sa (4th) Jang: Represents thunder. The focus of this form is to be calm and brave in the face of danger or fear (i.e., the sound of the storm), to wait for the storm to move and clear skies to appear. The gye is jin.

Teaguek Oh (5th) Jang: Represents the seon principle of being humble as you are learning advanced techniques. The gye of seon represents the wind.

Teageuk Yook (6th) Jang: Represents the overcoming of obstacles and hardships with self-confidence and skill. The gye Gam is the principle reflected here; it represents life-giving water, which allows the student to press on through difficulty.

Teageuk Chil (7th) Jang: Represents the mountains – and your skill level to be “on top” of the mountain. Perform this poomse focusing on its beauty and stability. The gye is gan.

Teageuk Pal (8th) Jang: Represents earth, the source of life for all living creatures. This form should remind the student of the fundamentals of kicking and punching, adding levels of difficulty as he or she moves to the black belt level – which is usually the next step in the student’s journey. The gye is gon.