Traditional Taekwondo patterns (called forms or poomse) are similar to the Karate kata forms, a exercise practiced in various martial arts. Poomse is the Korean word for form or pattern.

The forms you’ll be practicing depend on what organization your Taekwondo dojang belongs to. Taeguk forms are practiced by WTF schools; an ITF form practices the 24 forms developed by General Choi; ATA schools practice forms designed by ATA’s Master Instructor and his colleagues in the 1970s.

Taekwondo-Guide.com believes that you should learn these forms from a trained, certified Taekwondo instructor, not from a web site or a book. 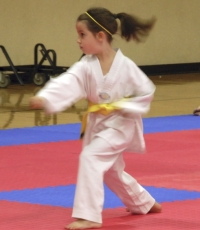